How is Shigellosis Diagnosed?

Shigella infection is diagnosed through testing of a stool sample.

Because the symptoms of a Shigella infection are consistent with a fairly large number of potential illnesses, including most foodborne infections, a diagnosis must be confirmed by a laboratory test. First, a stool sample must be obtained from the potentially infected person and then placed on a medium to encourage the growth of bacteria. If and when there is growth, the bacteria are identified, usually by looking at the growth under a microscope.

The laboratory can also do special tests to tell which species of Shigella the person has and which antibiotics would be best to treat the infection. Antibiotic-sensitivity tests are important because Shigella is often resistant to multiple antibiotics. 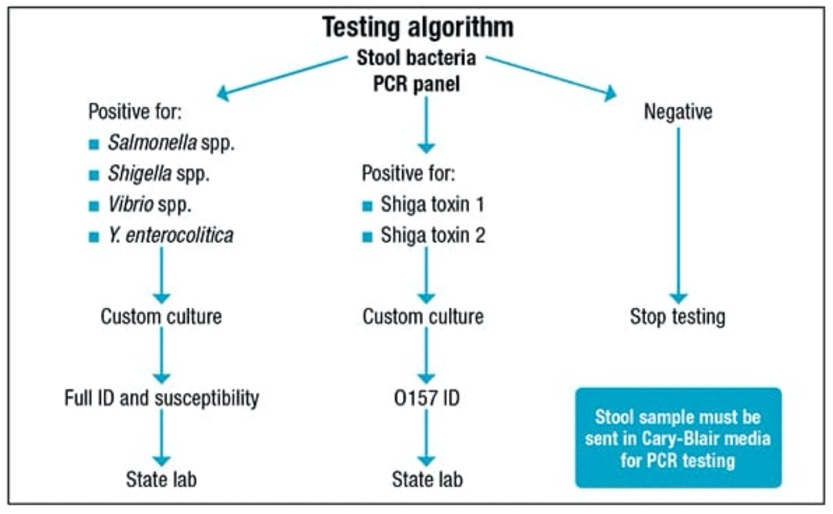 More advanced testing and surveillance methods, such as plasmid profiling and chromosomal fingerprinting, can also be used. So-called “genetic fingerprinting” of the bacterial isolate, using pulsed-field gel electrophoresis (PFGE), is a molecular technique that can help to characterize Shigella isolates, whether obtained from human or food samples. Taken together, all of these tests can assist public health officials in determining whether cases (confirmed infections) are isolated or associated with common-source outbreaks. There is potential for future creation and use of a rapid stool test for shigellosis diagnosis, but this method is still in testing phases.

Efforts to identify outbreaks of foodborne illness—whether caused by Shigella or other pathogens—are important to preventing the secondary spread of infection, especially with bacteria as highly communicable as Shigella. One major advance in these efforts was the creation of FoodNet. As described by the CDC:

FoodNet is an active surveillance system, meaning that public health officials routinely communicate with more than 650 clinical laboratories serving the surveillance area to identify new cases and conduct periodic audits to ensure that all cases are reported.

FoodNet collects information on laboratory-confirmed cases (defined as isolation for bacteria or identification for parasites of an organism from a clinical specimen) and cases diagnosed using culture-independent methods. Once a case is identified, FoodNet personnel at each site collect information about core variables, enter this information into a database, and transmit data to the CDC.