Most people who are infected with Shigella develop diarrhea, fever, and stomach cramps after being exposed to the bacteria. Symptoms may start 12 to 96 hours after exposure, usually within one to three days. Diarrhea may range from mild to severe, and it usually contains mucus. When more severe, the diarrhea is bloody 25% to 50% of the time. Presence of mucus and blood in diarrhea caused by Shigella infection is due to the destruction of tissue in the stomach. Rectal spasms, which are technically referred to as “tenesmus,” are common. 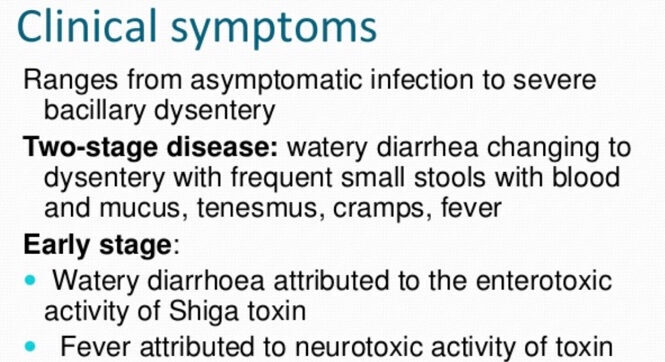 Shigellosis usually resolves in five to seven days. A severe infection with high fever may be associated with seizures in children less than two years old. Some persons who are infected may have no symptoms at all, but may still pass the Shigella bacteria to others.

The relationship between HIV infection and the subsequent risk for shigellosis has yet to be conclusively evaluated, although it is known that HIV-associated immunodeficiency leads to more severe clinical manifestations of Shigella infection. Moreover, persons infected with HIV may develop persistent or recurrent intestinal Shigella infections, even in the presence of adequate antimicrobial therapy. They also face an increased risk of Shigella bacteremia, which can be recurrent, severe, or even fatal.

How is Shigella infection spread?