Reactive Arthritis can be a serious and long-term risk of Shigella infection.

Persons with diarrhea caused by S. sonnei, in particular, usually recover completely, although it may be several months before their bowel habits are entirely normal. About 2% of persons who are infected with S. flexneri later develop pains in their joints, irritation of the eyes, and painful urination—something typically diagnosed as reactive arthritis.

Reactive arthritis, formerly termed Reiter syndrome, is an autoimmune condition that develops in response to an infection. It has been associated with gastrointestinal infections with Shigella, Salmonella, Campylobacter, and other organisms. Reactive arthritis can last for months or years and may be difficult to treat. 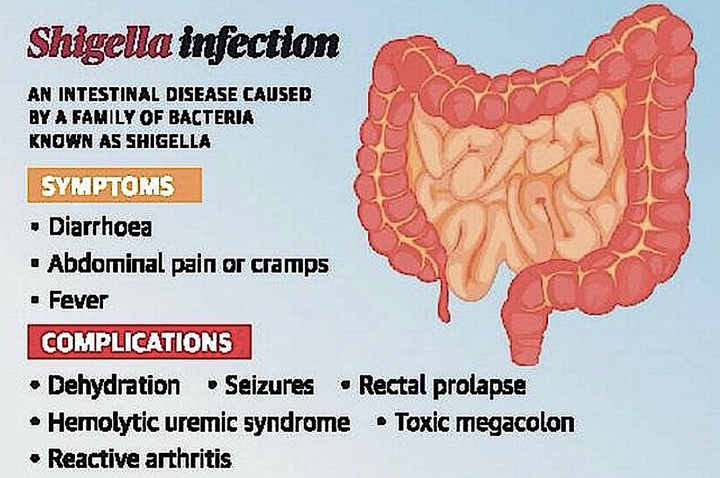 Once someone has suffered a Shigella infection, a certain level of immunity develops, meaning that the person is not likely to get infected with that specific type again for at least several years. This temporary immunity does not, however, protect against other types of Shigella.

Shigella bacteria multiply in the human intestinal tract and invade the cells, which results in much tissue destruction. This can cause issues with absorption of essential nutrients in the gut, which can lead to malnutrition and disproportionately affect people in developing countries. Many strains produce a toxin called Shiga toxin, which is very potent and destructive. Shiga toxin is very similar to the verotoxin of E. coli O157:H7. Complications of shigellosis include severe dehydration, seizures in small children, rectal bleeding, and invasion of the blood stream by the bacteria (bacteremia or sepsis). In some cases, the bacteria that cause shigellosis may also cause inflammation of the lining of the rectum (proctitis) or rectal prolapse.

In rare cases (but more commonly in S. dysenteriae infection), there can also be a deadly complication called “toxic megacolon.” This rare complication occurs when the colon becomes paralyzed, preventing bowel movements or passing gas. Signs and symptoms include abdominal pain and swelling, fever, weakness, and disorientation. Untreated, the colon may rupture and cause peritonitis, a life-threatening condition requiring emergency surgery.

The other relatively rare complication that can occur with a Shigella infection is the development of hemolytic uremic syndrome (HUS). This rare complication is more commonly caused by E. coli O157:H7, and it can lead to a low red blood cell count (hemolytic anemia), low platelet count (thrombocytopenia), and acute kidney failure. It is more common to develop HUS after being infected with S. dysenteriae.

How is Shigellosis Diagnosed?